The summer I turned fourteen was a big summer for me. I attended camp (I’m sure I’ll tell you that story soon), and I learned how to drive.

I grew up in a small Midwestern town. It boasts of fishing, hunting, farming, and the art of toilet-papering. To those who live in the Detroit suburbs, my small town was what they called “Up North.” To many of us who lived in that small town, we knew that “Up North” meant crossing a large bridge to the most northern part of our state. It was a quiet place, and it still is these days. Kids learned to drive young, usually on the farms, because it was practical for the families. Drivers’ training courses were just compulsory at that point–most of us knew how to drive already, we just needed the official certificates and maybe some help navigating highways.

On Sunday nights, my family would go to the local ice cream parlor. If we took the truck, my brother and I would pile in the back as my parents went into the cab for peace and quiet. If we took the Escort, then Jared would drive and I knew I would probably be the one taking the back roads home.

There was one problem.

The escort had a manual transmission and that scared me.

Many things came easy to me. Reading. Writing. Photography. Dance. Sprinting. With all of those, if I spent enough time practicing whatever it was, I ended up becoming pretty affluent in the activity. A stick shift was daunting. I had watched my brothers and even my parents stall the vehicles. I knew it was an art, a feeling, of knowing when to release the clutch and press the gas.

On Escort Sundays, I would eat my ice cream slowly, prolonging the exposure. Then my mom and brother would get in the back seat, my dad would take shotgun, and I would settle in behind the wheel. I had to move the seat as far forward as it would go, since my legs are so short. Dad would then guide me through the process. Press clutch and break. Put stick into first. Release break and start pushing the accelerator as you release the same amount of pressure from the clutch.

I would follow his directions, move about five feet, and stall out.

Mom and Jared were silent.

Dad was still patient. After all, we hadn’t even left the parking space at the ice cream parlor.

There was a slight incline leaving the parking lot onto Pratt Lake Road. I would usually stall at that spot. I learned when there was an incline, I had to apply more gas and let the engine rev a little in order to make it on the road. Then I had to make sure that I turned the wheel and got going before I pressed the clutch in and dropped the stick to second gear. The car would chug as I figured out the balance between clutch and gas, and if it was a good day, I made it about 1/8 of a mile before I had to move up to third.

On a bad day, I stalled. Fortunately, east bound Pratt Lake is deserted most of the time. About four houses and a cemetery dwell on that mile long stretch. On those days, it would take us almost a half hour to get the five miles back home, inching along the road, stalling every minute or so.

I did become more adept at it, thankfully, and by the time I turned fifteen, I had my permit and was used to driving the Escort to my orthodontist appointments, to visit grandparents, and the fateful voyage to take it camping. (The hill down into Munising and my dad yelling, “Down shift to third! Downshift to third!” and I started crying because I was confused. Going from fourth gear to third meant moving the stick up, not down. I opted to just put it into neutral and let dad guide me to the following steps.)

I don’t know if this was the point, at our stop in Munising, that I said, “I don’t know why I have to learn to drive a stupid stick shift! Everyone else has automatics! Why do we need stick shifts anymore?” My dad would give his standard reply, “All of my children will learn to drive a manual transmission.” In typical teenage fashion, I probably rolled my eyes and doubted any validity to learning how to drive something that was so archaic. Ridiculous parents, amirite?

The tune changed over the course of the next year. I was only stalling my car once a week. I rode the bus to school knowing that by the time my junior year started, I wouldn’t be doing that anymore. A month before I was to turn sixteen and be the driver of the Escort, my brother came home from college and, while out with his old friends, totaled the Escort. I found it completely unfair that he was still getting another car for his sophomore year at college (and an automatic, no less!) and I was left without a vehicle to drive when I was sixteen and the world was just waiting for me!

(We ended up borrowing his car my first week back at school, and I totaled it a few weeks later. He still got another new vehicle, and I was, yet again, left without a car. I grounded myself for a month because almost dying makes you rethink a few things.)

My parents said there was one option left for me.

Dad’s old pick-up truck, named The Animal: a 1978 emerald green full-size Ford truck. It had holes in the floorboards that we covered with pieces of carpet (I had to tell people, don’t step on the carpet, unless you want to be stuck for a while). It had a muffler not doing its job. It liked to buck and sputter long after I put it into neutral and took the keys out. It had a hole in the gas tank, allowing me only ten gallons at a time. It had an airhorn that didn’t really work anymore. It had a four-on-the-floor transmission. I looked at my parents.

They weren’t. My dad fixed a few small things on it, before anyone could drive it. It was my mom who decided to help me get used to the truck. She was a different coach than I was used to. My dad is an engineer and a pragmatic thinker. My mom is a nurse and knows how to relay the same information in a different way.

She took me, again, to that same stretch of road on east-bound Pratt Lake. I remember it was a sunny day, and the dust of the dirt road swirled around the truck as she explained that the Animal is different from the Escort. You can start in second gear, for example, and that allows you to have more flexibility when applying the gas to move forward. The clutch isn’t as sensitive, either.

It was like riding a bike. I stalled a few times, but within no time, I got the hang of it. I learned to back it up with ease (except the time I backed out of Rachel’s driveway and right into the deep ditch on the other side. But I learned from that experience. Once those back wheels are on the road, crank the wheel and it won’t go in the ditch!). It also gave me a small amount of notoriety.

The sound alone pulled attention toward me. Guys looked at me with respect. One even asked me when he would get to drive it. I still remember that day when I handed him the keys and said, “Have fun! But it can only go about 100 miles, so if you go too far, you’ll have to put ten gallons in it!” I was at my locker minutes later when the guy stomped over and gave me my keys. “What’s wrong?” I said. “Can’t you drive a stick shift?”

Of course he couldn’t. He didn’t have a family that insisted everyone learns to drive a manual transmission.

When the truck died halfway through my senior year, my dad was kind enough to get me a cute little red Dodge Shadow. He backed it into the driveway (another trick we were told to do, and I believe all of his children back our vehicles into spaces often enough) and I said, “What is that?”

It wasn’t. But I had begun to realize that knowing how to drive a manual transmission is absolutely vital. Four years ago, I was traveling in Austria when my friend broke her foot on our way to Vienna. Her husband called and asked, “Do you need me to come and drive you home?” I told him he didn’t need to, I could handle navigating the streets of Vienna and back to Salzburg if Mandy told me where to turn. “But, can you drive a manual?” I reassured him that my dad insisted that I learned and I was quite skilled at it.

That was the first time I silently thanked my father for teaching me that skill. I drove David’s little red VW Golf from Krems to Vienna to Salzburg. (Again, that whole story will be told as the most Epic Trip Ever.)

I also have a friend who wants me to teach her to drive. She said her father and husband have tried and failed. I think I need to bring my mom along on that one. I don’t have The Animal, but I have a plan this summer for her.

Because I just ordered my brand new Jeep a few weeks ago.

With a manual transmission. 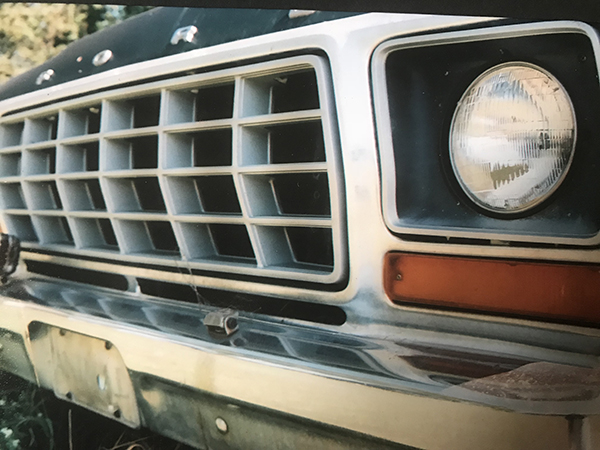 (The front of The Animal, now nestled in the yard) 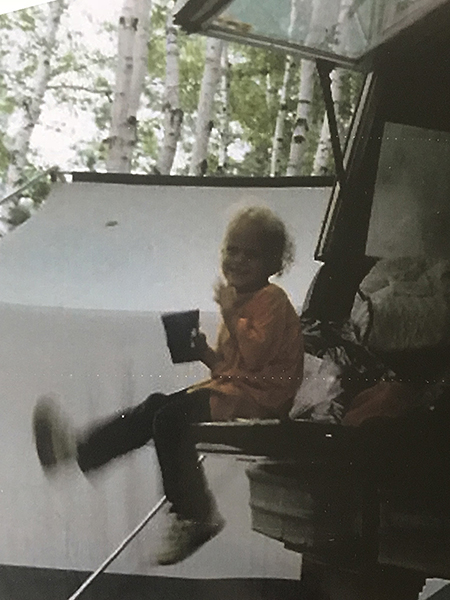 (Growing up with The Animal) 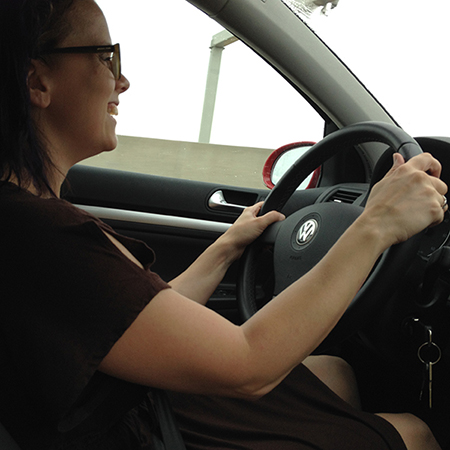 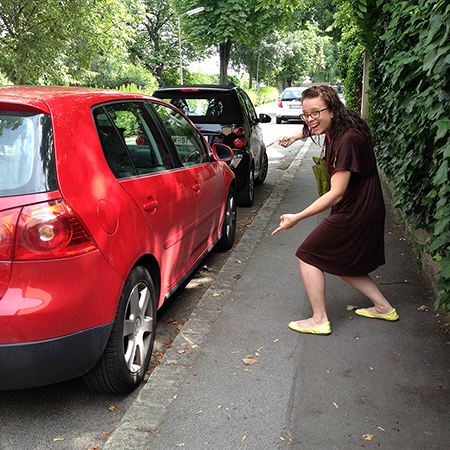 (Showing off my parallel parking skills in Vienna.)

the affordable alternative to event photography